25mm ACW Dixon Sharp-shooter
Merry Christmas and Happy New Year! I have slowed down painting large units
during the holidays, but I managed to find the time to paint this fine fellow. He is
a finely cast Dixon figure sold as a vignette piece. I added a few rocks and shrubs to
the base and I think he turned out OK. I hope everyone had a great Christmas and got plenty
of hobby stuff in your stockings and a game in or two! Take care - Cory 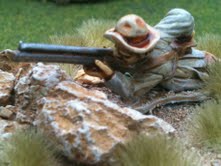 28mm ACW
I've been extremely busy at work lately,and haven't had much time for bloging, but I wanted to share some of my recent projects. I painted two new 28mm Dixon ACW regiments, the 183 Ohio
and the 24th Tennessee. Here are a few pics:

Here are some pics from our last ACW game. We normally use "Johnny Reb", but this time
we played with a home-brewed variant of DBACW. Please excuse the pictures; they were taken
during gaming breaks with my cell-phone. We had an enjoyable time playing! Here are the pics:

Hot off the painting table....the 23rd Michigan Infantry regiment! This unit fought at the
Battle of  Franklin as part of Col. Orlando Hurley Moore's brigade. They were stationed
on the Union right flank between the 183 Ohio (2 companies) and the 118th Ohio.

I've tried to paint them with the look of a grizzled, veteran, Western theater Federal unit. The fences
were built with a bunch of craft sticks and I spent many hours gluing about 12 feet of fencing! I experimented with some different fence colors, but I think they look most natural with a grey "weathered"  wash.

I've had enough painting for a while and it's time for a game!
My next blog report should be an AAR about a battle we have set up on the table right now!

I haven't been gaming much recently (just a little DBA / HOTT), but I have been
spending some time at the painting table. These guys are my latest creation and are hot of the table and  ready to hit the tabletop!

I painted this unit as a late war consolidated CSA Infantry unit, the 15th and 30th TN
Infantry. They fought at the Battle of Franklin in Nov. 1864 as part of Brig. Gen. Thomas
Benton Smith's brigade (Cheatham's Corps & Bate's Division). Other units in the brigade included the 2nd/10th/20th/37th TN Infantry, the 37th GA Inf. and the 4th Battalion GA Sharpshooters. The brigade was fortunate to have been engaged on the Federal west flank, where the fighting was less intense. At the battle of Franklin, the brigade suffered 47 killed, 253 wounded and 19 missing.

I have a unit of Federals on the painting table right now and I'm making a bunch
of rail fences. I don't like shopping much with my wife, but I don't put up much
of a fight when she wants to go to the arts & crafts stores. I can always find something
useful for gaming!  I recent picked up some bags of cheap cut wooden sticks that make
perfect 28mm fence posts!

This guy came with the "Hail Caesar" rules and I figured I might as well paint him! I don't have
any other Romans, but like many wargamers, I have had the nagging thought that I eventually
need to paint one! Every gamer needs a Roman army, right? Well, this figure painted up quite
easily and I just might have to order more. At the moment I'm leaning toward the classic
Imperial Roman vs Barbarians (Germans?) approach. Can any one recommend some good rules?
I'm looking for something that focuses on larger battles and uses units in the 24-36 figure size range.

I might go with my old standby "Tactica", but I think it would be a good idea to get out of
my comfort zone and try something new. I've read "Hail Caesar" but haven't played the rules.

Email ThisBlogThis!Share to TwitterShare to FacebookShare to Pinterest
Labels: Romans

Glorfindel - The Lord of the Rings

I had this GW blister of Glorfindel sitting on my table for years and
I thought it would be a fun and quick project while taking a
break from painting ACW figures...I was right! I was able to paint
both figures in a couple days and it was refreshing not having
to paint another canteen or knapsack!

Glorfindel is an elven lord, and appears in the LotR books, but is replaced by Arwen in the
movie. Here is a good Glorfindel link: http://en.wikipedia.org/wiki/Glorfindel

I have been staying on course with my 28mm ACW project. I'm trying to
get enough units painted before Nashcon 2013 in the Spring of next year. I think I'll have
plenty of time, but I like to have a set date in mind as my goal. It keeps me motivated! I'm starting
to feel a little ACW burn out now, and I think I'll switch over to some LotR figures in
honor of the new GW store that opened near my house!