Scott Mingus is a professional scientist in the paper and printing industry, but he is known to the historical gaming community as a miniature wargamer, author of numerous books on the American Civil War (ACW), publisher of the ACW gaming newsletter "Charge!", and a historical blogger. Scott was kind enough to allow me to ask him a few questions:

1. Scott, what else can you tell me about yourself? I grew up in southeastern Ohio about 10 miles from Phil Sheridan's boyhood home and 20 miles from William T. Sherman's house, so the area was steeped in Civil War history. My great-great-grandfather John Sisson was a 15 year old drummer boy in the 51st Ohio Infantry and three members of my family fought at Gettysburg and Antietam in the 7th West Virginia. I majored in Pulp & Paper Science and Engineering at Miami University in Oxford, Ohio. I lived in the greater Cleveland area for 23 years (a die hard Browns, Indians, and Cincy Reds fan). For many years I had a weekend hobby of selling baseball cards and sports memorabilia when that was popular. I am blessed with a wonderful life, three kids, and four grandsons. My Dad was a veteran of World War II and landed at Normandy on Omaha Beach on June 7th, the day after D-Day. He and his parents were my inspiration for all of my love for history.

2. How did you get involved in wargaming? As a kid I had a large collection of plastic army men, including a Marx 54mm Centennial Blue and Grey Playset as well as Fort Apache. My roomate at Miami of Ohio (Charles Reace) and I played a lot of SPI boardgames, including "Fast Carriers" and "Terrible Swift Sword". An MU graduate student, George Nafziger, introduced us to miniature wargaming at his apartment. He had an amazing collection of 25mm Napoleonics.

3. What periods and scales do you game in? I focus on 15mm Civil War, American War of Independence, and Plains Indians. One of my sons has a large collection of 20mm Vietnam figures, so we play that period as well (using "Charlie Company" rules).

4. What is your favorite period / rules to game and why? As the co-founder of the "Johnny Reb Gaming Society" with my wife Debi, "Johnny Reb" has always been my rules of choice. As a Civil War lecturer and occasional battlefield tour guide, I am fascinated by that particular period.

5. What ACW battle / campaign do you find most interesting and why? My specialty for my research and my books is the 2-week period of the Gettysburg Campaign immediately prior to the battle. When I moved to York, Pennsylvania, in 2001 to take an executive position with a global paper company based in that city, I became fascinated with the desperate efforts of the hastily organized state militia back in 1863 to defend the state and delay Robert E. Lee's Rebels until the Army of the Potomac could arrive. York was the largest town in the North to fall to the Confederate army during the entire war when Jubal Early captured it on the weekend before the Battle of Gettysburg. In the early 2000's my oldest son was doing his Master's thesis at Millersville University on the burning of the world's largets covered bridge to prevent Jubal Early from crossing into Lancaster County, and that sparked an interest in developing the story into a book format. The subsequent best-selling "Flames Beyond Gettysburg", was a finalist for the Army Historical Foundation's Distinguished Writing Award, as well as for the Bachelder-Coddington Award.

6. What USA general / personality do you find most interesting and why? CSA? For the U.S. it has always been George Armstrong Custer, another native of Ohio whose home was not too far from mine. He was a complex man - vain and conceited, yet personally brave. I have long admired my fellow Buckeyes Sherman, Grant, and Sheridan as well. For the CSA, as a result of my research for my books, I would have to say John B. Gordon (the subject of "Flames Beyond Gettysburg") and Jubal Early. Early ransomed York for $100,000. He received $28,610 in door-to-door collections by the town council. Years later, he wrote to a York official that he wanted the rest of his money, with interest, or he would turn the city in to a collection agency.

7. Scott, tell me about some of the books on the ACW that you have written. "Flames Beyond Gettysburg" tells the story of Early's and Gordon's march through Pennsylvania, their interactions with the local populace, and the efforts of the 20th, 26th, and 27th Pennsylvania Volunteer Militia to slow them down. It's my most popular book by far. Continuing with the theme of Early's division, I also wrote a book on the ":Louisiana Tigers in the Gettysburg Campaign, and my newest book, a biography of Early's subordinate Brig. Gen. William "Extra Billy" Smith (the oldest CSA general at Gettysburg) comes out in October. I have also written several books on human interest stories from Gettysburg and Antietam.

8.Tell me more about the "Charge!" newsletter that you publish. I used to enjoy the old "Zouave" magazine published first by Dave Reynolds and later in color by Ivor Janci. When that publication ceased, I decided to fill the void with a "Johnny Reb" focused similar newsletter on a quarterly basis. My wife does all the printing, mailing, billing, etc. and runs the home office. I do most of the editing. We try to publish 2 or 3 scenarios in every issue. In recent years, as the input of JR3 scenarios has dramatically slowed, we opened the newsletter up to any regimental level gaming system to attract new writers and contributors, as well as a new audience. Back issues are very popular sellers on wargamevault.com.

9. If readers are interested in buying your books or subscribing to "Charge!", how can they do so? All of my books are available on Amazon.com at: http://www.amazon.com/Scott-Mingus/e/B0028ONIJQ For information on Charge!, please visit my wargaming blog at: http://scottmingus.wordpress.com/

10. What future projects are you working on or have planned? I continue to enjoy writing a blog for the local newspaper on Civil War history: http://www.yorkblog.com/cannonball/. The editor of that paper (The York Daily Record) and I, along with another local paper, will be providing live coverage of the 149th Anniversary Reenactment at Gettysburg this July via Twitter. This should be a fun experiment in advancing the art of news coverage! I am currently co-writing a historical novel of the Civil War and am also co-writing another non-fictional work on the war. In the wings is a planned book with my two sons, who are both college professors. On the wargaming front, I am working with Ivor Janci to get another scenario book published (For "Brother Against Brother") as well as to get "Undying Courage" and "Enduring Valor" back in print with updated versions reflecting the latest research in troop strengths. I received so much positive feedback on my digital book, "Antietam Army Lists", that I am contemplating an entire series for wargamers.

Additional information about Scott can be found on his website: http://www.scottmingus.com/

Here are some more pictures I took of some of the games at Nashcon 2012.

Email ThisBlogThis!Share to TwitterShare to FacebookShare to Pinterest
Labels: Nashcon

The Nashville Area DBA Group had a permanent gaming area set up at Nashcon for
open DBA gaming, themed games and a DBA Arthurian Tournament. I played in two games
on Friday. The first was against Terry Webb. We played Marian Roman vs Gauls and my Romans
squeaked out a victory, but I'm certain Terry took it easy on me! The second game I played was a DBA
double game. David Crenshaw and I (Romans) took on Terry and Paul Potter's Gaulic hordes. To sum up the battle...we were crushed when Paul's chariots got around my flank and were running wild in our rear...
never a good sign.

Here are some pictures I took last weekend at Nashcon 2012. These are of the huge "Gunboat Dilpomacy" naval game and also of Richard Houston's vendor booth. Here is a description of the game from the convention events list:

"David Raybin and Bob Duncan have emptied their closets of all the BIG ships in their fleets! This game is so BIG that Mike Peccolo is going to help referee the proceedings. What's the scenario, you ask? When ya' got big boats with 90 pounders you don't need a scenario! Just fill the sky with lead and the water with torpedoes! Oh, did we mention submarines? Daivd and Bob bring us their 25mm naval free-for-all using Bob's Gunboat Diplomacy rules and more ships than you can shake a yardarm at! Room for 16 players." 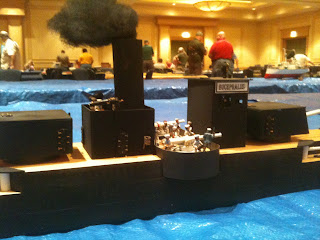 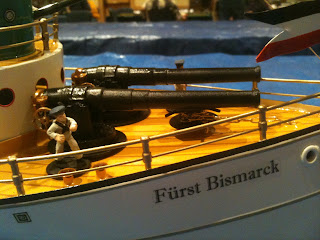 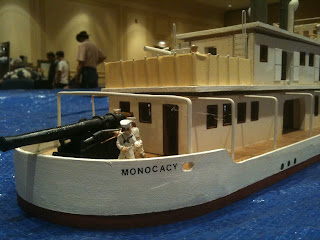 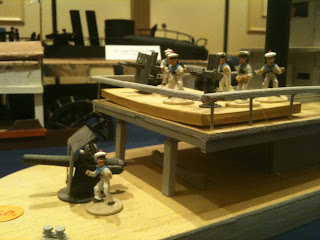 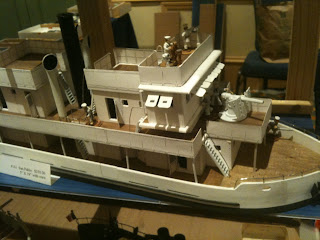