Background - I'm running an ACW campaign game set during Hood's 1864 Franklin / Nashville campaign. The campaign includes players from across the globe maneuvering their troops across middle Tennessee. We have players from the USA, Australia, UK and Germany. The time zones can make it challenging it times, but I just chalk it up to "fog of war" and inconsistent courier communication. The generals have a lot of control over the direction their troops will move, but as the GM I add to the narrative by slowing things down due to weather, skirmishes, local commander's decision's, logistics, etc., and I can speed some things up too for similar reasons - spies, unknown fords, back roads, etc.

This is a fun AAR from Brett Kvisle's group in Australia that played out one portion of this battle on the tabletop. In the potion of the battle Gen Stephen Lee's corps was across Stone's River from the Union corps of Gen. Smith. Skirmishing and artillery fire and a perceived advantage caused local CSA brigade and divisional commanders to attack across the river, drawing the entire corps into the fight. As they say...the rest is history ... in miniature! Here are some pictures a well as the OOB's and AAR.

Thanks for playing this game, Brett! 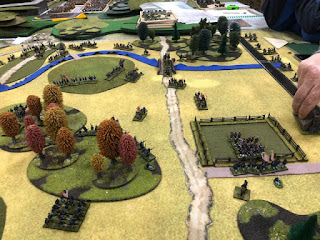 Deploy Federals first – they may deploy anywhere west of Stone’s river.
Victory Conditions – As the extreme right flank of the army they must prevent the CSA from inflicting 30% casualties on them. (They must withdraw toward Nashville in that case.) The round hill, near the farm in the middle of the table is the key to holding the flank of the Union army and their position will be untenable if captured by the Rebs. 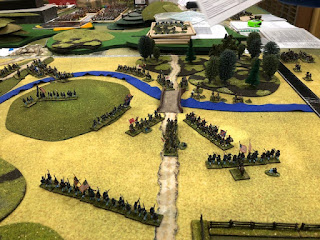 Deployment – may deploy anywhere east of Stone’s river. The river may be crossed only at roads and 1 ford to the east of the round hill near the loop in the river.
Please Note: any troops exiting off the north table edge since they may factor into the next battle. 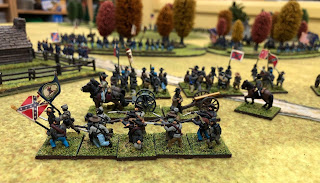 Battle Murfreesboro December 1, 1864 – After Action Report
The Players:
Union: Richard
Confederates: Jason
Umpire: Brett
I was to play in the event of even numbers but umpire in the event we had an odd number of players.
The Union Army was tasked with avoiding 30% casualties whilst at the same time preventing the Confederates from capturing the hill next to the farm which sat between the 2 roads. The hill was considered essential for anchoring the right flank of the Union position at Murfreesboro. Its loss would have been a disaster for the Union troops in and around Murfreesboro. The Confederates had more and better troops and more artillery but were faced with having to cross the Stones River. They only had 2 bridges, 1 marked ford and 1 unmarked ford in which to cross.
The Union were to set up first. This meant screening the entire front to cover the 4 possible crossing points. Given they just didn’t have enough troops to adequately cover all positions and have a reserve they set up their troops in line as follows. McArthur’s Division occupied the woods to the north and across the road supported by 2 batteries, Garrad’s Division had 2 brigades in line on the edge of the woods in the centre and the 3rd brigade on the critical hill in the centre with artillery support. Moore’s Division set up in line in the southern part of the central wood and covering the Franklin Rd with one brigade whilst the second brigade was in line with 2 batteries on the feeder road next to the farm. All Union guns were trained on a potential attack point.
The Confederates decided to hold with Clayton’s Division in the north, cross with Johnson’s Division in the centre and attack with Stevenson’s Division along the Franklin Rd. This was the weakest Union division and the most thinly manned part of the Union position. A breakthrough here would see a fight in the open with no cover for the inexperienced Union troops. 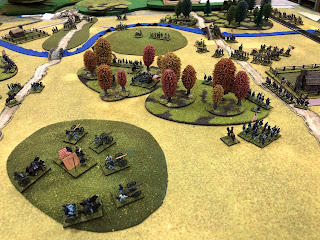 The Confederates made 2 tactical errors. They tried to push their artillery across the unmarked ford in the centre to capture the hill located in the bend of the river ahead of their infantry believing the Union with relatively inexperienced troops would remain defending the edge of the wood. The artillery moved too slow. They should have crossed with infantry first to create a bridgehead to protect the artillery coming across later. In the south they decided to continue in march column once they got across the bridge on the Franklin Rd rather than delay a move to form up into supported line.  They were eager to establish a bridgehead and again thought the Union would be reluctant to give up their defensive position.
The Union commander recognizing the rashness of the Confederate advance attacked out of the wood in the centre with the 1st and 2nd brigades and severely shot up the lead Confederate battery which was forced to retire thereby making the other 2 batteries also retire. This action halted the Confederate attack in the centre and gave the Union control of the hill in the bend of the river for most of the game. In the south seeing the Confederate’s advance in march column a move too long Moore’s sent the 2nd brigade charging along the Franklin Rd and straight into the first Confederate column. Unbelievably the Confederate artillery threw a 10 and inflicted 2 losses on the Union 2nd brigade. These 2 aggressive actions by the Union player effectively thwarted the Confederate attack in both the centre and south.
The fight in the centre for the hill and in the south along the Franklin Rd continued all game. Each side had their opportunities but just when you thought it was all over for one side or the other a great throw or a terrible throw would balance it out again and the struggle would continue.
The Union forces basically fought the Confederates to a standstill and although the Confederates managed to finally take the hill in the river bend and establish a bridgehead in the south on the Franklin Rd they lost too many men to continue the attack without reinforcement.
The Union forces although in better shape also do not have enough strength to throw the rebels back without some reinforcement because there are too many Confederate batteries now sighted on crossing points. 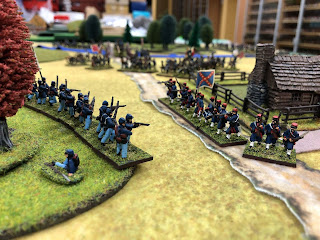 It was a win to the Union.

Campaign Narrative - the CSA, sustaining heavy loses and gaining no ground,  must fall back and regroup. - Cory